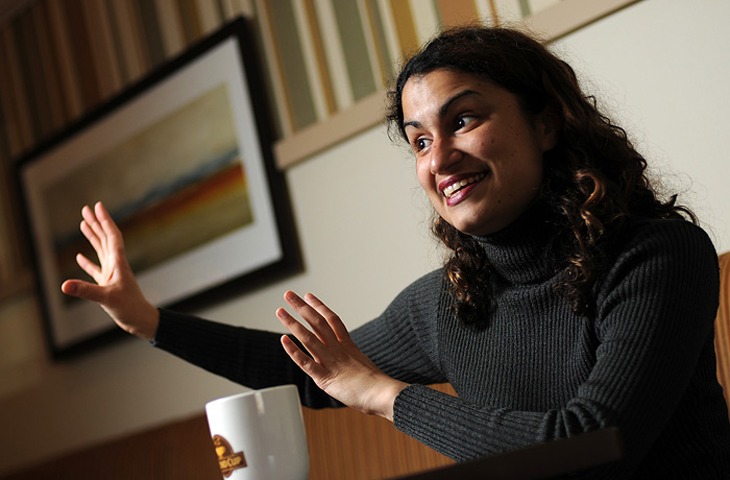 Combining physics and music has been a passion for Diane Nalini de Kerckhove (Loran Scholar ’92) since she was a high school student in Montreal. She forged a career in both fields as an assistant professor of physics and jazz musician. At the University of Guelph, her team of researchers and technicians worked with Canada’s first one-micron nuclear microprobe. Unlike light microscopes, the microprobe’s beam of protons reveals a sample’s structure at the atomic level, able to focus at up to 1/100th the width of a human hair.

In her jazz career, Diane released the album Kiss Me Like That in 2009 to coincide with the International Year of Astronomy. The album unites her love of music and astronomy through a collection of 13 songs that celebrate humanity’s fascination with the sky. Kiss Me Like That was featured from coast-to-coast on CBC and Radio-Canada.

As the outreach committee chair in her department, Diane worked to inspire young Canadians to pursue careers in science. Whether hosting public lectures, high school group tours or events with organizations such as Waterloo’s Perimeter Institute, Diane finds youth and community members are very receptive to her message that scientists can take an interdisciplinary approach to research and can continue to explore musical or artistic interests.

Recruited to the federal government through the Recruitment of Policy Leaders program, Diane is now a senior policy analyst at Environment Canada, in the air emissions branch.

“I am so proud to be a part of the Loran Scholar community. Nurturing the combination of academic excellence, passion and commitment to giving back to the community that Loran Scholars possess is so important, not only for Canada, but for the world.”

For Diane, being selected as a Loran Scholar was a life-changing experience. She credits the Loran Award with significantly expanding her horizons and pushing her to take meaningful risks at a pivotal juncture in her life. The award allowed her to live away from home while studying physics at McGill University and helped her develop the confidence to apply for the Rhodes scholarship, which she received in 1996. Diane also greatly appreciates her connection to the community of past scholars and events such as the fall 2009 Connexion alumni weekend. In her words, “the alumni weekend was an excellent opportunity to reconnect with old friends and explore fascinating and relevant topics, such as the cost of higher education and the role of culture in cities.”

As a donor to the Loran Scholars Foundation, Diane is inspired by the bright and engaged young people she supports. Diane explains: “I am so proud to be a part of the Loran Scholar community. Nurturing the combination of academic excellence, passion and commitment to giving back to the community that Loran Scholars possess is so important, not only for Canada, but for the world.”