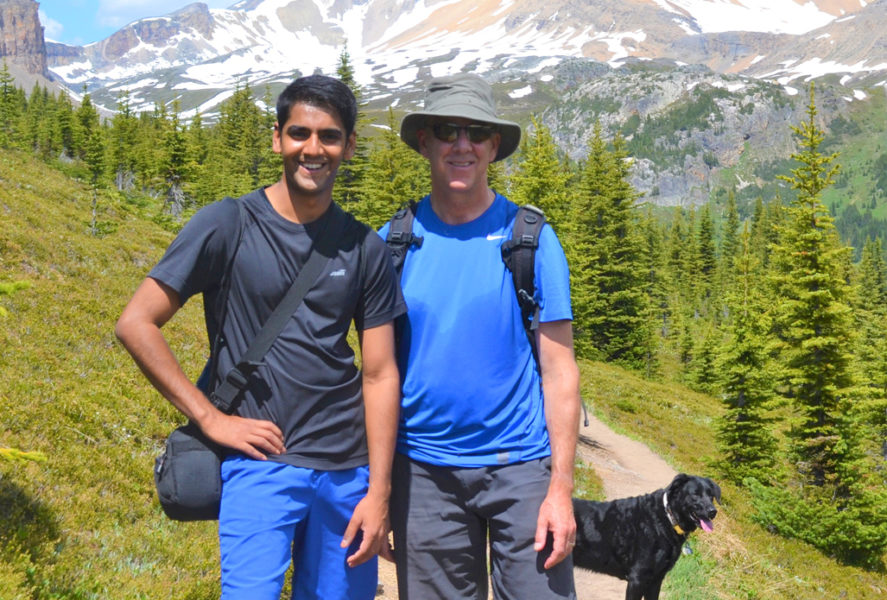 We match each Loran Scholar with a trusted Canadian leader for a four-year mentoring relationship. Our mentors introduce scholars to their new community, provide them with advice and resources and continually challenge them to act with courage, empathy and honesty.

Originally from Mississauga, ON, Kabir Nadkarni (McCall MacBain Loran Scholar ’14) chose to explore a different part of Canada and study Engineering Physics (Co-op) at the University of Alberta. When he first met his mentor Chris Lumb, CEO of start-up incubator TEC Edmonton, Kabir was struck by what a phenomenal connector Chris was within the community.

Before becoming CEO of TEC Edmonton, Chris was the CEO of Micralyne Inc. He sits on the boards of CMC Microsystems, CANARIE Inc., and Argus Machine. He is also a former board member for various tech organizations including Startup Edmonton. His experience in entrepreneurship and constant support were invaluable to Kabir as he pursued his own entrepreneurial work in the Edmonton community.

“Being new to Edmonton, Chris played a big role in introducing me to people in the city and the university that shared my interests and were at different points in their lives. Without Chris, I don’t think our paths would have crossed.”

Chris helped Kabir weigh his final summer internship options and, in the end, choose to work in electricity and renewable energy policy at the Pembina Institute in Calgary. During his time at the University of Alberta, Kabir has been Chair of the City Planning and Infrastructure Subcommittee on the City of Edmonton’s Youth Council and conducted undergraduate research at the National Institute for Nanotechnology. He was the undergraduate Engineering representative for the General Faculties Council on campus where, with Chris’ help, Kabir advocated for large-scale curriculum changes to better reflect the needs of students.

Kabir meets with Chris monthly, interacts with him through social media and recently joined Chris’ family for a day hike at Helen Lake, near Canmore, AB. “I am continually impressed with Kabir’s achievements, including the high quality work he does, and even more by the community connections he makes so effortlessly. His combination of intellect, communication, and ability to relate to diverse groups of people will serve him well in future. I look forward to maintaining an ongoing rapport with Kabir as he builds his future.”