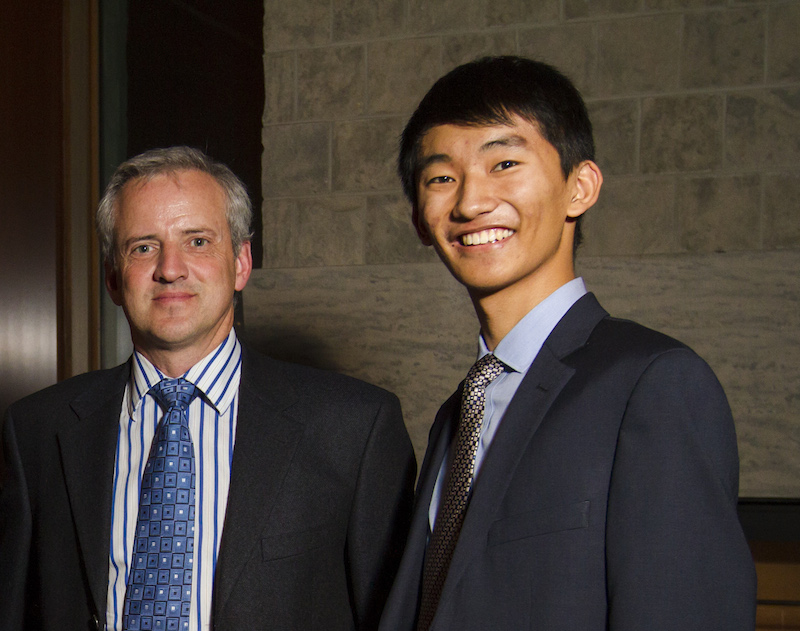 We match each Loran Scholar with a trusted Canadian leader for a four-year mentoring relationship. Our mentors introduce scholars to their new community, provide them with advice and resources and continually challenge them to act with courage, empathy and honesty.

Terry Zhang (Loran Scholar ’14) is a third-year commerce student at Queen’s University. He worked as a social enterprise consultant with Emzingo in South Africa for his first summer and subsequently completed a policy internship at the Institute of International Finance in Washington, DC.

In the Kingston community, Terry served on the board of Youth Diversion, a local charity, and has been volunteering with an after-school program. As Academics Commissioner for the Queen’s Commerce Society, he successfully lobbied for the removal of the program’s undergraduate ranking system.

Terry meets monthly with his mentor, Greg Bavington, who is Executive Director of the Queen’s Innovation Connector and Special Advisor to the Provost, Innovation and Entrepreneurship. Mr. Bavington joined Queen’s in 2012, after five years as President and CEO of KN Rubber LLC. He serves on the board of several private companies, income trusts, trade associations and non-profit organizations.

“I really appreciate getting Greg’s feedback on my ideas,” says Terry. “For example, he helped me determine the feasibility and viability of a social enterprise concept I was developing last year. Most importantly, I am very thankful for a conversation we had about meaningful volunteering. It was a turning point that helped me rethink how I can best serve the Kingston community.”

Mr. Bavington comments, “As a Loran Scholar, Terry pursues his ideas with energy and grit. He’s approachable, generous with his abilities and able to attract team members easily. It is a delight to work with Terry and I am looking forward to seeing what life holds for him.”