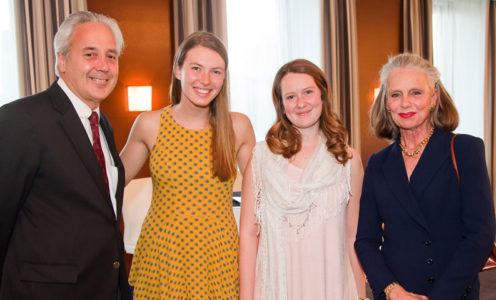 Jean and Sylvie Chagnon have always believed in the importance of an education that allows youth to take risks and supports their talents. They began supporting the first Lallemand Loran Scholar in 2012.

Established in Montreal at the end of the 19th century, Lallemand Inc. operates in 40 countries across the globe. Initially created to supply ingredients to the baking industry Lallemand is now a leading research, production and marketing corporation of yeast and bacteria for the human and animal nutrition industries, pharmaceuticals, and agricultural industry. The company was purchased by the Chagnon family in 1952.

Jean was President and CEO of Lallemand Inc. for 34 years before retiring in 2015. He continues to serve as a special advisor. He was also a director of Van Houtte Inc., Canada Life Financial Corporation and the Canada Life Assurance Company. Sylvie remains actively involved in the company’s corporate giving strategy and is very active in the community as a member of several boards, including the Sainte-Marie Hospital Foundation, Place des Arts, as well as the Fondation de la Place des Arts. She has also served on the boards of the Quebec Breast Cancer Foundation and Les Grands Ballets Canadiens de Montréal, and is co-founder of the Serenity program.