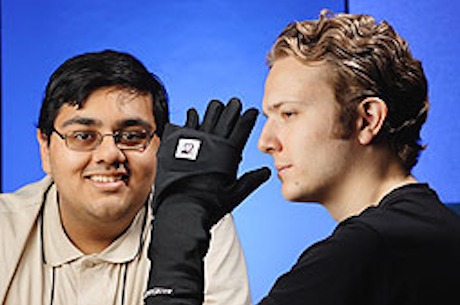 When he scribbled down the first designs for a CPR assist device while sitting in a school cafeteria, Corey Centen (Loran Scholar ’03) had no idea where it would lead. Described by one journalist as a “cross between Michael Jackson’s glove and a Nintendo power glove,” the black one-size-fits-all device uses a series of sensors and chips to help people give CPR correctly. It won several major awards and made international headlines, with both Time Magazine and Popular Science naming it one of 2007’s best inventions.

At the age of 22, Corey and his collaborators pursued the development and marketing of their invention, founding Atreo Medical Inc. They raised $500,000 through the Ontario Centres of Excellence Investment Accelerator Fund and sold the company two years later to Medtronic. The invention, which evolved into a handheld device, was launched in 2013.

Corey credits the Loran Scholars Foundation with giving him the financial independence and moral support to develop his inventions. It allowed him to co-found Mobilab Technologies Inc. during the summer after his first year at university, an experience which prepared him for the commercialization of the CPR assist device.

A native of Ottawa, Corey decided to leave his hometown in order to pursue his studies at McMaster University in Hamilton. He was drawn to McMaster by its electrical and biomedical engineering program, which combined two of his interests. “I wanted to learn to live on my own and take in the whole university experience while doing it.”

As befits an inventor, Corey’s advice for the new generation of Loran Scholars is simply to innovate: “Whether it be designing the next new product, starting the next community program or planning the next big trip to bring support to countries around the globe—take risks.”

Corey has since started a new healthcare technology venture. He has been a Loran Scholars Foundation donor since 2006.