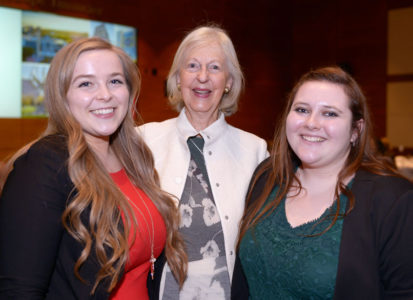 Wendy brought significant expertise to the Loran Scholars Foundation board, having served as a director or trustee of several companies and charities, including George Weston Ltd, a company founded by her grandfather in 1882. She is an honorary trustee of the Royal Ontario Museum and the American Museum Trustee Association, and she continues to serve on the Loran Scholars Foundation Honorary Council.

Wendy believes strongly in the importance of education and the rigorous approach the Loran Scholar Foundation takes to selecting its scholars. “The interview experience itself can be educational, especially when the interviewers are able to bring out things that the candidates haven’t thought of themselves,” she says. “It is a great opportunity to reflect on their strengths and weaknesses. There is value, too, in meeting others of their own age group who are also trying to do their best in their own way.”

Wendy served as a mentor to Emma Lyndon (Loran Scholar ’98) and a member of the academic committee, a group of volunteers who convene annually to consider requests from the scholars to renew their awards. “The renewal process encourages them to keep their effort up, to maintain their marks and commitment to the community. It challenges and reminds the scholars to strive to live up to the expectations of the committee members who selected them.”